From Whangarei to Invercargill and 16 other towns and cities between, Rhys Darby will bring home a brand new show in 2017, on sale December 8 nationwide.

Darby’s shows are always a mix of astute observations and stand-up cocooned in a fantastical story that takes his audience on a journey through the ridiculous to the downright silly.  This show promises to be no different.

In Mystic Time Bird Rhys turns to the world of ancient mysticism to find answers to the world’s problems.  In doing so, he discovers that he was a bird in a past life, and this knowledge takes him on an unexpected path.  Darby will address the big questions like “Are we truly free in this day and age or is alien technology guiding us into an even greater trap?” All this, plus weird movement and sound effects.

Rhys Darby became a household name after starring in the US TV show Flight of the Conchords. Now based in Los Angeles, he regularly performs standup around the world and has starred in many international TV shows such as The X Files, Netflix’s Voltron, TVNZ’s Short Poppies.  He will be seen this year in the Jumanjii sequel with Dwayne Johnson and Kevin Hart, Netflix’s Lemony Snicket, Whose Line is it Anyway Australia and many other shows. He’s quite a busy boy so grab a ticket now as we don’t know when he will be back! 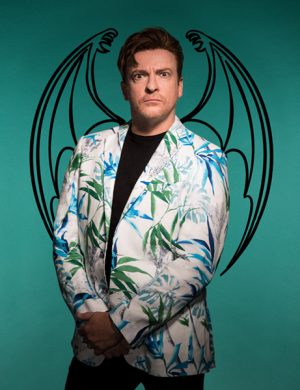